figure.ID Recently the virtual world was shocked by the viral video of a construction worker who was fired because he was caught not wearing a mask.

In the viral video, construction workers can be seen packing their belongings into pink backpacks.

“This is a project worker who was caught not wearing a mask. We from the security team immediately took action and were removed from the project,” said the security officer who recorded the video.

The confused look on the construction worker’s face was clearly visible as he left the project site.

Read also: There is a blessing behind the disaster, a construction worker who went viral because he was fired after being caught not wearing a mask is now being hunted, this figure promises to teach business and love the Bakso Aci branch

After going viral, the construction worker was wanted by many people.

One of them is a member of the Indonesian House of Representatives, Dedi Mulyadi.

Launching from Kompas.com, based on the investigation, it is known that the construction worker is Sudrajat (24), a resident of Cirebon Regency.

Also read: In-laws were not granted because they were pregnant, this is the fate of the bride whose wedding video went viral because her husband was divorced a few seconds after Ijab Qobul 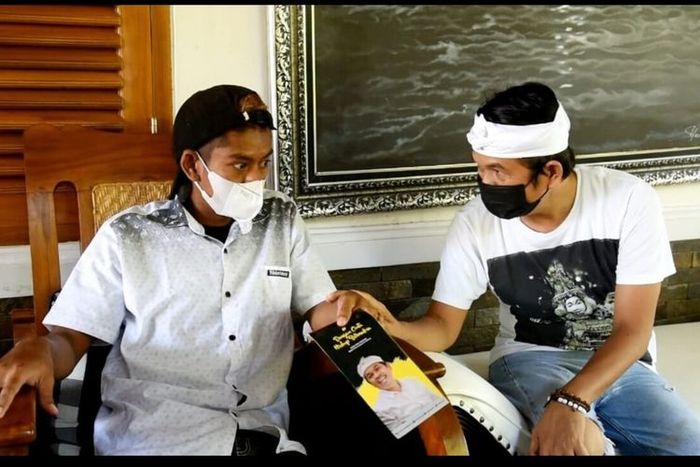 Sudrajat (24), a construction worker who went viral because he was fired for not wearing a mask, met with DPR RI member Dedi Mulyadi.

To Dedi Mulyadi, Sudrajat told the chronology of being arrested without wearing a mask until he was fired.

Sudrajat said the incident began when he was working on a housing project in the Puri Kembangan area, West Jakarta.

Then he saw an ice seller walking around the construction site.

Sudrajat who was thirsty bought ice and drank it immediately.

That’s when he had to take off his mask so he could drink ice.

Unexpectedly security officers came and reprimanded him for not having time to wear his mask again.

Without hesitation, the security officers assessed Sudrajat without hearing the facts first.

Because of the PPKM situation, they asked the project leader to fire Sudrajat.

“He said at that time he was working wearing a mask. Then he bought ice outside the building, then went back into the area.

“Drink ice, take off the mask, then the security guard is told to go home.

“Actually, wearing a mask is only taken down when you want to drink ice,” said Dedi Mulyadi repeating Sudrajat’s story as quoted from Kompas.com.

Also Read: Viral Teenagers in Riau Coma Due to Frequent Smoking and Staying Up Late, Lungs Full of Fluids: Critical, Family Gives Up

“First, I offered him a job in the neighborhood where he lived, he could be a mason, tend the garden, or whatever he wanted.

“Secondly, I have prepared the following business training for business capital,” said Dedi Mulyadi via his cellphone, Monday (12/7/2021) quoted from Tribun Jabar.

Given two options, Sudrajat said he wanted to consider them first.

“He now wants to go home first to rest in his village.

Also read: Beaten by husband on the side of the road, this woman only became a spectacle for the citizens, finally died shockingly because no one dared to borrow aid

“After that he promised to choose one of the two offers that I submitted,” concluded Dedi Mulyadi.

He promised to finance Sudrajat for entrepreneurship.

Not only giving him one branch of his Bakso Aci Huy Akang culinary business, Arief Muhammad also promised to teach Sudrajat in managing a business.

Also read: Beautifully dressed bride ends crying in the corner, the groom is suddenly afraid to see the face of his future wife, the cause is revealed

“Friends, does anyone know the man in this video? Or maybe there is a number to call? If you like, I want to teach you business, and give 1 branch of @acihuy.akang for free. Insyaallah it will be useful for life and family,” he wrote through the Instagram account @ariefmuhammad. Arief Muhammad’s post about a construction worker went viral because he was fired for not wearing a mask.